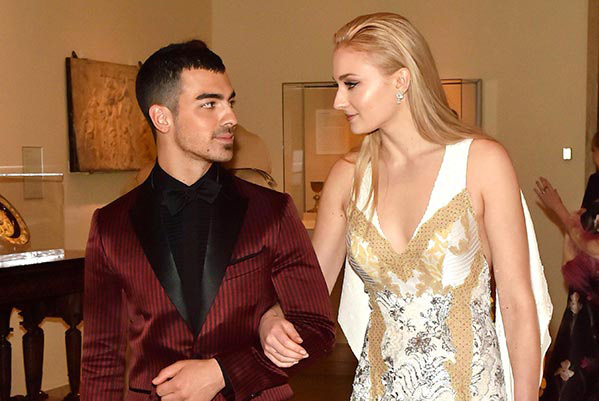 Sophie Turner’s engagement ring is definitely fit for a queen. The young Game of Thrones starlet prepares to join house Jonas, and took to Instagram to spread the word.

Sophie and fiancé Joe Jonas raced each other to social media, posting the same sweet photo of their two hands, with Sophie sporting a dazzling diamond engagement ring. The bride-to-be captioned the pic with, “I said yes,”, while Jonas echoed the sentiment, writing, “She said yes!”

The starstruck couple was first introduced in 2016 by mutual friend Hailee Steinfeld who met Sophie on the set of Barely Legal, and Joe during collaboration with his band DNCE. The relationship began right away but the couple did not officially confirm it until the HBO after-party for the Golden Globes in January of 2017.

No news yet about the date of the much anticipated wedding, but we do know that sisterly co-star Maisie Williams will in fact be a bridesmaid.

If you are looking for all the details about Sophie Turner’s engagement ring, you’ve come to the right place!

In a collaborated effort both Turner and Jonas posted an understated, yet chic, debut of the engagement ring on October 15th, 2017.

There is just no mistaking that unique pear shape, or even more surprising double band.

Here’s a cheeky flash of the front of Sophie Turner’s dazzling engagement ring. Now let’s get to the details!

This clean and modern setting symbolizes the balance that the two will hopefully enjoy in their marriage. It is also very fashion forward and perfect for an independent, fiery personality like Sophie.

The center stone of Sophie Turner’s ring is a sleek pear cut diamond. The pear is the most brilliant of all fancy cuts, consisting of 58 facets, just like a brilliant round cut. It is the ultimate option for style without sacrificing sparkle. It suits a woman who is confident, and not afraid to stand out.

Always be careful to protect the delicate tip of a pear-cut, as you don’t want it to get stuck or snagged on fabric.

The best bet to safeguard your pear is a six-prong setting. This way, five prongs hold the diamond snugly in place, while the sixth prong guards the point.

How many carats is Sophie Turner’s engagement ring?

Joe Jonas must have asked his fellow famous brothers for advice, because he did great!

Sophie Turner’s engagement ring is a stunner of a three carat diamond.

How much did Sophie Turner’s engagement ring cost? And what’s it really worth?!

While Joe Jonas’ representation has been tight-lipped on the subject, a 3 carat pear diamond with good color and clarity can cost around $60,000:

Allowing for $5,000 for a custom, pavé setting to complement the stone, and it’s likely that Joe Jonas spent around $65,000 on Sophie’s ring.

Don’t worry, it is definitely possible to steal the style of Sansa Stark, err… I mean, Sophie Turner, and I’ve found three regal options to consider.

The first up is the closest match, with a pavé double band in 14k white gold, mimicking Sophie Turner’s engagement ring style. The petite halo around the center stone creates the illusion of added stone size as well. Click here to learn more about this 14k White Gold Double Shank Pear Halo Engagement Ring by my recommended retailer James Allen.

This next option also features a double pavé band, but with an added literal twist. It jazzes the concept of the double band up a little, so you can put your own unique spin on Sophie’s style. Click here to learn more about this Empress French Pavé Diamond Engagement Ring from my recommended retailer Blue Nile.

Last, but certainly not least is yet another interesting take on Sophie Turner’s double band. This setting features no added pavé, but instead sports an intricate twist, for an understated yet interesting look. Set in 14k white gold this setting compliments the center stone without stealing the show. Click here to learn more about this Split Shank Twisted Solitaire Engagement Ring from my recommended retailer Blue Nile.