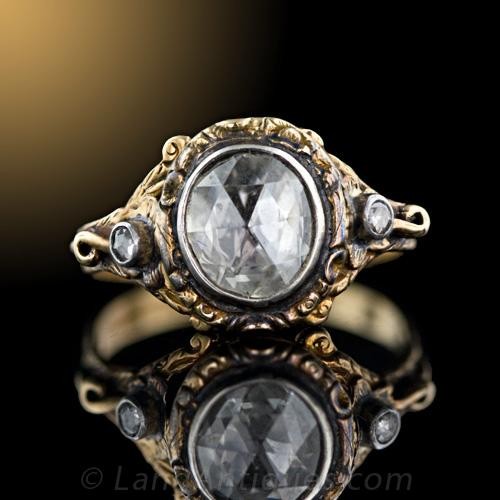 The Victorian period has been immortalised in Sweeping dramas like yesterday’s classic, Gone With The Wind, all those swoon-worthy remakes of Jane Eyre and Phantom of the Opera, and now the modern instalment of Young Victoria have fanned the flames of our love for everything Victorian – the dresses, the style, the jewellery!

If you’re looking to capture the romance and opulence of these epic films, a Victorian style engagement ring is the way to do it.

The Victorian Period (1837-1901) spanned the sixty-four year reign of Britain’s beloved queen, Victoria. Beginning in the time of horse-drawn carriages and ending in the age of automobiles, the broad expanse of the Victorian Era is often divided into three segments – Early (Romantic Period), Middle (Grand Period), and Late (Aesthetic Period).

Early Period Victorian jewelry reflects the eternal love between Queen Victoria and her prince, Albert. The young queen ascended the throne at 18 years of age, in the throes of romance, as she is pursued by the dashing Albert. The jewelry of this time period is fresh, hopeful, and romantic.

Middle Period Victorian jewelry reflects the anguish of Queen Victoria as she mourns, for years, the death of her beloved Albert. The jewelry of the Grand Period is dark, heavy, and opulent.

Late Period Victorian jewelry sees an exit from the heavy mourning period and a return to airy light-heartedness.

The discovery of diamonds in South Africa delivered a flood of diamonds to a market that was clambering for more.

As a longtime lover of diamonds, Queen Victoria wore diamonds prolifically and society was quick to adopt the tastes of the young, fashionable queen. The flood of diamonds from the South African mines enabled the masses, and not just the wealthy, to own these sparkling jewels.

The Industrial Revolution saw the near extinction of hand-fabricated jewelry. As the art of jewellery-making became mechanised, the mass production of jewelry lowered the cost and increased the supply making jewellery accessible to the majority of society.

Lightbulbs extinguished the need for candles and diamonds blazed with an electric, incandescent glow. With their industry now calibrated by machines and not by hand, diamond cutters analysed the diamond’s brilliance affected by electricity instead of candlelight.

The styles and designs of the Victorian Era reflect the tastes and emotions of Queen Victoria herself and the motifs of the jewelry are steeped in sentimentality.

When Prince Albert presented Queen Victoria with a serpent engagement ring, the world took notice and the serpent was a trending style for years. Representing eternal love, the serpent ring was cherished by the young queen.

Usually given to lovers or friends who were separated for a length of time, Mizpah rings were popular in Victorian times. The Mizpah, a Hebrew word, is quoted from the Book of Genesis – “The Lord watch between me and thee while were are absent one from another.”

The ring above shows the hearts and arrows design, a popular motif of the Victorian Era, which hinges open to reveal Mizpah.

Another sentimental style of the Victorian Era is the acrostic DEAREST ring. The beginning letters of the gemstones spell out D.E.A.R.E.S.T – diamond, emerald, amethyst, ruby, emerald, sapphire, topaz.

The ring above features a band of gemstones with the beginning letter, diamond, on the right with the remaining letters spelling out ‘dearest.’

This sweet and lovely ring features the double heart and bow motif so common in this age. The center of the hearts feature a natural pearl and a ruby ringed with old mine cut diamonds and topped off with old mine cuts in the bow.

Clovers and flowers in general were naturalistic designs used in Victorian rings while the crescent was an ethereal motif used prolifically throughout the era.

Another ethereal motif used in Victorian rings is the star. Often appearing with the crescent, the star was used abundantly in Victorian jewelry.

This ring features a diamond star on a background of rubies.

Rings of the Victorian Era run the gamut from dainty and whimsical to opulent and grandiose. No wonder this is an era of jewelry manufacturing that is often sought out by brides searching for the unusual ring. It is often emulated by jewelers to attract the discriminating eye.

A common accent on Victorian rings is the ancient art of granulation first seen with the ancient Etruscans. Revived in the Victorian Era, the Etruscan style of using tiny gold beads and wires was adopted by various jewellers of the age.

Victorian rings were often accented with a lacquering technique called enameling. Enameling begins as powdered colored glass which is applied to metal and then fired until it melts. This produces a layer of color on the surface.

With prongs that reach up for the diamond straight from the shank itself, the belcher style setting was a popular choice for Victorian rings. With this style, the prongs are fashioned by cutting away the shank of the ring.

This ring features an old mine cut diamond in a belcher setting.

The buttercup style setting is a dainty way to highlight a diamond or gemstone. This setting has scallops framing the center gem that is usually prong set.

This ring features a sapphire surrounded by two tiers of buttercups.

Symbolizing two souls coming together, the bypass ring became popular in the Victorian Age and still endures as a sought-out romantic style today. The two ends of the ring do not meet and instead bypass each other at the top.

The rose cut diamond has a flat base and a domed, peaked top, which resembles a rose bud. A popular cut of diamond throughout the 19th century, diamond cutters fashioned it by hand, adding more and more facets (flat surfaces) to it over the years to increase its sparkle.

This Victorian ring features a large, rose cut diamond in the center with old mine cut diamonds on each side.

The old mine cut diamond has a square shape to it and resembles today’s cushion cut diamond.

The corners on the old mine cut and the cushion cut are rounded giving them both a soft square shape. However, the old mine cut has a very small table (top facet) and a large culet (facet on the point of the diamond) and a deep depth.

This ring features an old mine cut diamond in a belcher style setting. Notice how the diamond is a soft square shape.

The old European cut diamond has a round shape and closely resembles the round brilliant cut of today. However, the old European cut has the small table, the large culet, and the deep depth of the old mine cut. The old European cut is the result of machines being used to facet diamonds; it’s rounder with a more precise facet arrangement making it more sparkly than previous diamond cuts.

While yellow gold hadn’t disappeared from the jewelry scene, it definitely took a back seat to the white hot metals in the art deco period. Platinum reigned supreme with 18 and 14 karat white gold running close seconds.

Platinum’s incredible strength allowed jewelers to create intricate pieces without compromising the security of the gemstones or the durability of the piece. This is what allowed the jewelers too create the filigree effect that we saw earlier.

Rings are usually stamped with ‘PT850’ or ‘900plat’ signifying how many parts of 1000 is platinum versus the alloy 850 signifies that a ring is 85% pure platinum, while 900 is 90%. Platinum is usually alloyed with another member of the platinum family, usually iridium or palladium.

White gold rings will be stamped with ‘18k’ or ‘14k’ signifying what parts of 24k are gold versus the alloy. The metal alloyed with gold is usually nickel to turn the gold to white colour. The ring is then electroplated with rhodium, a member of the platinum family, to intensify the white colour of the gold and strengthening it

If you are interested in an authentic Victorian ring, there are many on-line antique dealers who can help you shop.

Even though there are many antique dealers on the internet, shop with stores that specialise in antique jewelry who employ gemologists. In addition to being knowledgeable about the Victorian Period, these antique dealers can also educate you about other design periods that may interest you.

Also, reputable antique dealers know that each vintage piece is unique and that pictures don’t always capture the piece accurately. Therefore, dealers usually have a return policy in place if you are not satisfied with your item. If this is the case, I recommend calling the dealer immediately after receiving the item to alert them that you are not happy. They usually have a specified number of days when you must return the item for a refund.

Things to Consider when Buying an antique Victorian Engagement Ring

Because each ring is unique and dated, there are some things to consider when purchasing an antique.

Rings can only be sized larger or smaller to certain sizes until the integrity of the ring becomes compromised. In addition, many Victorian rings have hand engraving along the metal and sizing could remove the designs.

These are antiques which means they will have wear on them. Prongs could be thin and may need re-tipped. Also, the gemstones could have some abrasions and chipping from years of wear by previous owners.

As we reviewed in the cut styles, diamonds weren’t cut to the precise proportions to produce maximum brilliance like they are today. The diamonds in Victorian rings will be less sparkly.

Diamonds were usually worn in the evening in the 1920s and the low lights of the speakeasies masked the yellow body colour of diamonds. As a result, warmer diamonds were acceptable accessories for the stylish flapper girl.

Many diamonds will not have an diamond grading report. The GIA will not grade a mounted diamond and removing a diamond from its setting could damage the historical correctness of the piece.

If you like the look of authentic Victorian rings, but aren’t keen on the issues we highlighted, you could opt for a reproduction ring. A reproduction ring is a modern ring fabricated to emulate the style of the Victorian period, with modern levels of materials and craftsmanship.

They will listen to your ideas, give you guidance, deliver incredible workmanship and stand behind their product with a level of service and value that you will rarely find in any arena.

If you’re looking for an Art Deco ring to wear every day, I recommend you check out London Victoria Ring Co’s selection of Victorian styles.

10% discount on platinum settings for a limited time at Taylor & Hart. Find out more.